While Republican Adam Laxalt campaigns for Nevada’s highest office on detailed plans for education reform through promoting career and technical training while rewarding schools that perform well, Democrat Steve Sisolak’s lackluster education platform is drawing criticism for his lack of detail on a key issue for voters.

The Las Vegas Review-Journal published a scathing editorial this weekend, claiming Sisolak “doesn’t even have the basics down” on education and that his “plan is to come up with one after he’s elected.” The Review-Journal also writes that Laxalt, in contrast, “has done his homework” and “before Sisolak talks any more about improving Nevada education, he needs to educate himself.”

While Adam Laxalt offers Nevada a new way forward to reform the state’s education system in ways that benefit students and teachers, Steve Sisolak shows an alarming lack of depth on the issue, proving he can’t be trusted to lead.

Education has emerged, once again, as the most important issue in the race to be Nevada’s governor.

Republican Adam Laxalt and Democrat Steve Sisolak agree that Nevada needs to spend more. Laxalt has pledged to increase education spending by $500 million. Sisolak has yet to offer a specific dollar amount but says he ‘will work to increase funding.’

Both candidates have called for having some appointed members on school boards. In Clark and Washoe counties, Laxalt wants to shift ‘to a system where school boards contain a mix of elected and appointed trustees, with a majority of members for each board being elected.’ Sisolak has called for ‘a mix of locally elected officials, locally appointed leaders and state-appointed experts.’

That’s where most of the similarities end.

Laxalt has released two detailed education plans, including one focused on career and technical education. Sisolak’s education plan is to come up with one after he’s elected.

Sisolak’s website says he will ‘bring together educators, school board members, parents and elected officials from southern, northern and rural Nevada to modernize the 50-year-old funding formula so that it addresses the needs of students, educators and parents.’

The problem with relying on a consortium of people is that they’re going to disagree on how to direct resources that are always limited. This proposal reads like an effort to pander to everyone in the state instead of laying out a vision that voters can evaluate — and potentially reject.

Both candidates have said they want to pay teachers more, but how they will do so is different. Laxalt wants ‘to acknowledge and reward those teachers who go beyond the call of duty in the classroom.’ Nevada has long needed some form of merit pay, and it’s encouraging that Laxalt recognizes that. Paying top teachers more to work at low-performing schools would go a long way toward boosting student achievement.

Laxalt also wants to create a fund that financially rewards schools for excellent performance. The schools would compete against similar schools. For instance, all Victory Schools would be in one category.

Laxalt also shows a better command of the details. He’s offered broad changes and in-the-weeds proposals. He wants to reform Nevada’s star rankings to account for dual credit for CTE and allow students to take the WorkKeys Assessment Test, which focuses on measuring if students are career ready, instead of the ACT.

Sisolak doesn’t even have the basics down. When Sisolak released a series of education proposals in March, they included the assertion that Republicans in 2015 required ‘a supermajority to increase any revenue for K-12 or higher education funding.’ That’s not true, and it suggests he doesn’t have anyone on his team even vaguely familiar with state budgeting. He also said that school districts should be allowed ‘to carry over their end-of-year fund balances without penalty.’ That’s a great idea with one small problem. They already are.

Reviewing their competing education proposals makes it clear the Laxalt has done his homework. Before Sisolak talks any more about improving Nevada education, he needs to educate himself. 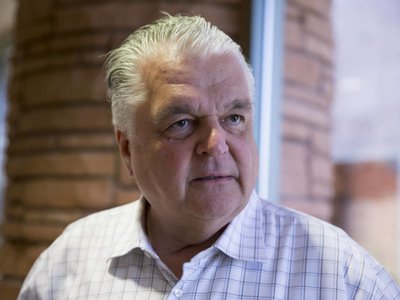 Members of the union representing state-employed police officers have voted overwhelmingly that they have “no confidence” in Gov. Steve Sisolak given his handling of pay and staffing issues.