In his annual State of the State address, Governor Ricketts called for the passage of a constitutional amendment that would prevent local property tax revenues from growing by more than 3 percent annually. Governor Ricketts’ proposals would also provide $550 million over two years to the property tax credit fund, allowing further relief for Nebraska taxpayers.

Governor Ricketts’ bold fiscally conservative leadership has Nebraska firmly headed on the right path as he continues to fight for tax relief to help working families.

DeSantis Secures Antibody Doses On His Own, Skirting Biden’s Reduction Of Lifesaving Treatment

Maryland Gov. Larry Hogan demands answers on "sudden rationing" of "life-saving treatments," as Florida Gov. Ron DeSantis vows, "We're going to fight like hell to make sure that our folks get what they need."

New Gallup low for Biden, even below Harris

A new Gallup survey shows that President Joe Biden has not hit bottom yet in his polling freefall.

Iowa Gov. Kim Reynolds’ job approval rating has inched up since June — a change driven by Iowans who like the way she’s handling the state economy

Twenty-six Republican governors are urging Joe Biden to do more to address the deteriorating situation along the southern U.S. border.

Opposing View: I’d encourage Americans to get vaccinated, as I did. But that choice is theirs to make – not the federal government’s to make for them.

Over the past year, Nebraska’s economy has been booming, creating more and more great opportunities here in the Good Life. 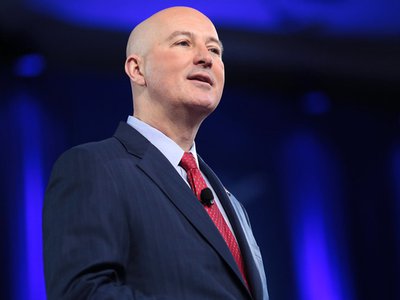 Nebraska leads the country in having the lowest unemployment rate by 0.3% according to the U.S. Bureau of Labor Statistics.