Per Fox News, After updating "new model policies" for the treatment of transgender students, Virginia Gov. Glenn Youngkin (R) said on Tuesday that parents are the decision-makers and not the state.

"This is not controversial," Youngkin told "Hannity."

"This is about restoring power to parents. And let's just be clear, children do not belong to the state. They belong to families. And when a child is wrestling with this kind of decision, a parent should absolutely be the primary counselor adviser and help her in wrestling with this decision."

Youngkin on Friday updated "model policies" regarding the treatment of transgender students, claiming that the previous "guidelines disregarded the rights of parents."

The Virginia Department of Education updated its 2021 Model Policies for the Treatment of Transgender Students in Virginia’s Public Schools, noting that the guidelines under the previous administration "disregarded the rights of parents and ignored other legal and constitutional principles that significantly impact how schools educate students, including transgender students."

The new policies also stated that the previous guidelines "promoted a specific viewpoint aimed at achieving cultural and social transformation in schools."

The policies go on to cite the 14th Amendment in the Constitution which gives parents a "fundamental right to direct the upbringing and education of their children."

Furthermore, the administration issued "board model policies" in accord with "compliance with non-discrimination law," and "identification of students," among several other standards as it pertains to the treatment of transgender students in public elementary and secondary schools.

Every local school board is required to "adopt policies" that are consistent with the 2022 Model Policies.

The policies also define "transgender student" as "a public school student whose parent has requested in writing, due to their child’s persistent and sincere belief that his or her gender differs with his or her sex, that their child be so identified while at school."

Youngkin said that although teachers could play a role as a "trusted counselor or administrator," parents should be an "absolute primary adviser."

"And to shut them out of this doesn't make any sense. And that's why we pressed forward with these model policies that put parents in the primary role."

Youngkin went on to say, "And anybody who thinks that parents should be shut out, I can't quite understand where they think the decision should be made if families and parents aren't the primary decision maker with a child."

Youngkin highlighted education as a critical issue of his gubernatorial campaign. After defeating Democratic opponent and former Virginia Gov. Terry McAuliffe in November, Youngkin touted that his campaign became a "movement led by parents." 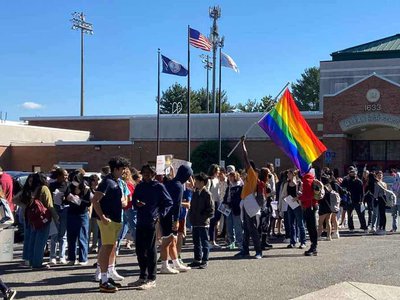