The economy added 313,000 jobs in February, crushing expectations, while the unemployment rate remained at 4.1 percent, according to a Labor Department report Friday that could help quell inflation fears.

Economists surveyed by Reuters had been expecting nonfarm payroll growth of 200,000 and the unemployment rate to decline one-tenth of a point to 4 percent.

An increase in the labor force participation rate to its highest level since September helped keep the headline unemployment number steady, as the number of those counted as not in the workforce tumbled by 653,000 to just over 95 million.

A separate measure that takes into account those out of the workforce and the underemployed — sometimes referred to as the "real" unemployment rate — held steady at 8.2 percent.

Stocks surged following the report, with the Dow industrials up 375 points Friday afternoon after being slightly negative before the news.

The last time the unemployment rate was this low was in December 2000.

Oregon is in play for Republicans in the midterm elections

Speaking at a press conference in Okaloosa County, DeSantis panned Biden for allowing a Trump-era border control measure to end

Gov. Henry McMaster has signed into law a bill that will require transgender athletes to compete on teams that represent their birth-assigned gender.

Virginia Gov. Glenn Youngkin has announced the creation of a task force to craft policies to combat violent crime

‘They Don’t Care If You Suffer At The Pump’: DeSantis Bashes Biden

Arizona began busing migrants from the U.S.-Mexico border to Washington, D.C., this week, joining Texas in a protest over the Biden administration’s policies on immigration and border control.

Parents are 'sleeping giants' who will fix American education

Speaking at a press conference in Okaloosa County, DeSantis panned Biden for allowing a Trump-era border control measure to end

U.S. gas prices hit an all-time record Tuesday, and experts don't expect the pain at the pump to ease any time soon.

Utah Gov. Spencer Cox unveiled the state's new Energy and Innovation Plan that pursues an "any of the above" strategy and a commitment to American energy independence. 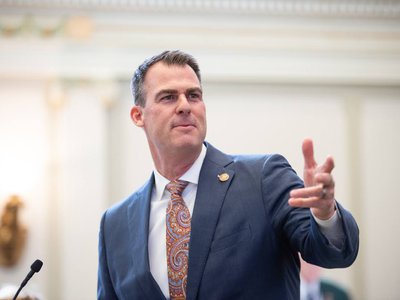 Gov. Kevin Stitt visited The Daily Signal to talk about the big issues facing Oklahoma and a Supreme Court case that brought him to Washington, D.C., last week.