As they compete for the Democrat gubernatorial nomination in New Hampshire, Steve Marchand and Molly Kelly have continued to double-down on calls for job-killing tax hikes on Granite State families. At a forum this past weekend, Marchand made it clear that he will reject New Hampshire’s traditional pledge by political candidates to oppose the imposition of state income or sales taxes.

Marchand has plenty in common with his primary opponent, Molly Kelly, who has an established record of pursuing tax increases on New Hampshire families, and even voted against allowing a ballot measure to prohibit increases to the state income tax when she was a member of the state legislature.

With either Marchand or Kelly as their nominee this November, New Hampshire Democrats will be led by someone with an established record of supporting reckless tax hikes that would burden working families. New Hampshire voters can’t trust them to lead.

Marchand, a former mayor of Portsmouth who ran for governor in 2016, said he will reject the so-called ‘pledge,’ a long-standing, unofficial promise from New Hampshire political candidates that they won’t consider introducing a broad-based state income or sales tax.

In Marchand’s estimation, the pledge is an anachronism that prevents the state from looking for new sources of revenue and making much-needed investments in public education and infrastructure. 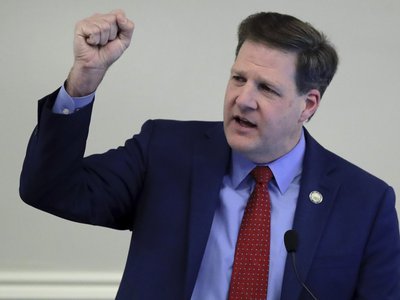