The inability to manage state government with any semblance of competence has been a hallmark of Governor Roy Cooper’s tenure. From his abysmal handling of recovery efforts following hurricanes that devastated the Tar Heel State, to his inability to deliver unemployment benefits to struggling North Carolinians, Cooper has proven that he cannot be counted on to deliver results.

Rather than admitting fault and fixing the problems, Cooper did what he always does – put politics and his political cronies first, opening up a “secret” DMV office that operated only to serve certain residents. While North Carolinians waited in line for up to five hours in some cases to renew their licenses, Cooper administration insiders got fast-tracked special treatment.

“When it comes to challenges impacting North Carolinians’ day-to-day lives, Governor Cooper has repeatedly failed to rise up to the occasion and put the citizens he was elected to serve first,” said RGA Communications Director Amelia Chassé Alcivar. “His shocking mismanagement of one of the most essential functions of government – fixing roads and getting people drivers licenses – coupled with his trademark insider dealing goes to show that North Carolinians can’t count on Roy Cooper.”

The News & Observer Headline: “Audit: NCDOT Overspent Hundreds Of Millions Because Of Poor Budgeting And Oversight”

In Fiscal Year 2019, The North Carolina Department Of Transportation (NCDOT) Spent $2 Billion Beyond Its Revenue Stream. “The question about running out of money goes back to October 2019 when State Treasurer Dale Folwell had called on Cooper to fire N.C. DOT Secretary Jim Trogdon due to the department spending $2 billion beyond its revenue stream of $7 billion and coming close to its bottom limit for cash reserves.” (A.P. Dillon, “Hostile Exchange Between Outgoing NC DOT Chief, Lt. Gov. Over Unused Old Rail Cars,” North State Journal, 3/4/20)

In April 2020, NCDOT Announced That Due To Its Budget Shortfall The Agency Would Make $2 Billion In Cuts To Future Projects – Slashing The Number Of Projects By Over 70%. “A budget shortfall for the North Carolina Department of Transportation has led the department to make cuts to future construction contracts by $2 billion… The revenue drop means the N.C. DOT will need to slash the number of tentative construction projects for the next fiscal year to 38, down from 131. In scaling back that list, the N.C. DOT told North State Journal that they anticipate reducing the budget for those projects ‘from about $2.6 billion to $671 million’ and that the project schedule ‘will have to undergo major changes.’” (A.P Dillon, “NC DOT Budget Shortfall Leads To Bid Cuts Of $2 Billion,” North State Journal, 4/22/20)

Despite Budget Concerns At NCDOT, Cooper’s Administration Doled Out Exorbitant Raises And Made Wasteful, Bizarre Expenditures

An Audit Found That NCDOT’s Overspending Was Caused By A Failure To Monitor Spending And Enforce Compliance. “But the auditor’s office says NCDOT’s overspending in fiscal year 2019 had other causes. It says the department’s spending plan was not based on cost estimates for specific projects and operations scheduled for the year and that the Office of the Chief Engineer didn’t monitor spending or enforce compliance with the plan. Too often NCDOT based its spending projections on what it had spent in the past, according to the audit. For example, it says, the department spent $194 million more on pre-construction engineering than expected because it based its forecasts ‘entirely on prior-year spending,’ and then didn’t adjust when additional projects arose throughout the year.” (Richard Stradling, “Audit: NCDOT Overspent Hundreds Of Millions Because Of Poor Budgeting And Oversight,” The News & Observer, 5/5/20)

Cooper’s Administration Spent Almost $40 Million On Pay Hikes For NCDOT Employees. “The N.C. Department of Transportation misinterpreted a state law in a way that allowed it to pay $39 million more to its employees last year than lawmakers had intended, according to a report released by the State Auditor’s Office on Wednesday.” (Richard Stradling, “State Audit Concludes NCDOT Improperly Spent Millions On Raises; The Agency Disagrees,” The News & Observer, 7/8/20)

In 2017, The Cooper Administration Purchased Circus Train Cars For Nearly $400,000; Since The Purchase, The Trains Have Been Left Abandoned In The Woods. “The outgoing North Carolina Secretary of Transportation was dinged for wasteful spending involving the purchase of circus rail cars. According to reports, the North Carolina Department of Transportation purchased nine old circus rail cars in 2017 for $383,000.N.C. DOT’s Katie Trout responded saying the cars were supposed to be refurbished and put back into use as part of a strategic transportation initiative, but instead they have sat untouched for almost three years on a section of unused track owned by the state.” (A.P. Dillon, “Hostile Exchange Between Outgoing NC DOT Chief, Lt. Gov. Over Unused Old Rail Cars,” North State Journal, 3/4/20)

In early November, Newsom was found to be in violation of his own recommended virus precautions when he attended a friend's birthday dinner at The French Laundry, a three-star Michelin restaurant located within Napa County in Yountville.

Governors Immediately Push Back On ‘Unconstitutional’ Biden Plan: ‘Will Fight Them To The Gates Of Hell’

“If you go down the road of defunding law enforcement, you're going have hell to pay on the back end,” he warned.

In early November, Newsom was found to be in violation of his own recommended virus precautions when he attended a friend's birthday dinner at The French Laundry, a three-star Michelin restaurant located within Napa County in Yountville.

“If you go down the road of defunding law enforcement, you're going have hell to pay on the back end,” he warned. 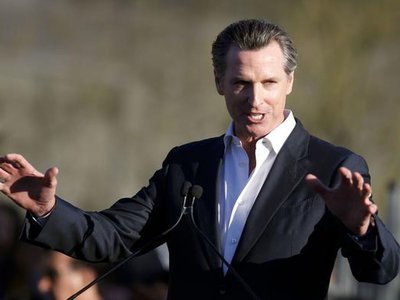 Last year, California’s population decreased for the first time in recorded history and it lost a congressional seat.