Per the Washington Examiner:

Republicans are nearly three times more likely to say that they are “extremely proud” of America than Democrats, a huge gap that has persisted since President Trump’s election.

The latest Gallup survey found that 67% of Republicans are “extremely proud” of their country compared to just 24% of Democrats.

Of note in Gallup’s latest survey on American pride was the drop among Republicans, which was 76% a year ago. It is unclear why the number declined, though Gallup noted that it’s survey took place recently and after the death in police custody of George Floyd and the continued coronavirus crisis.

By comparison, Democratic pride increased two points during the period.

“These latest data are from a May 28-June 4 poll, which also found 20% of Americans are satisfied with the way things are going in the U.S., and presidential approval fell back to 39%. The poll's field period encompassed the arrests of the police officers charged in Floyd's death as well as the nationwide protests that were sparked by the incident and President Donald Trump's controversial responses to them,” said Gallup.

It also said that the overall pride figure was the lowest ever recorded. “Although a majority of adults in the U.S. still say they are ‘extremely proud’ (42%) or ‘very proud’ (21%) to be American, both readings are the lowest they have been since Gallup's initial measurement in 2001,” said it’s analysis.

Pride among the races also hit lows, and Gallup suggested the death of Floyd in Minneapolis was a factor.

“Notably, extreme pride among whites has fallen below 50% for the first time and nonwhites' is 24%. Racially charged incidents involving police and the emergence of the Black Lives Matter movement have increasingly contributed to a national discussion about the challenges blacks face in society and likely also factor into the decrease in American pride among nonwhites,” it said. 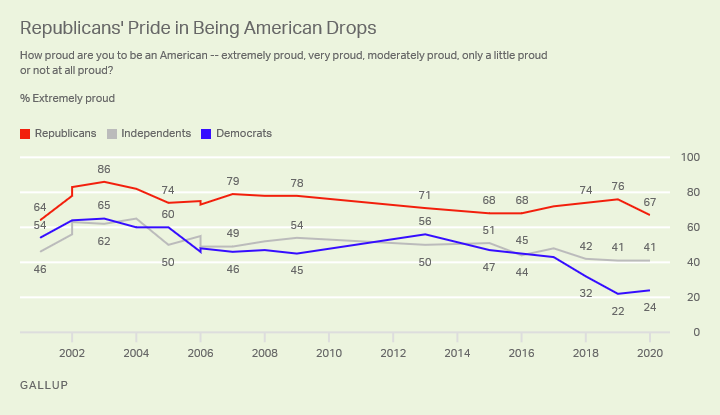